On behalf of Dorset Bird Club I would like to wish you all a very Merry Christmas and a great birding New Year.

Few reports today due to the wet weather.

Yesterday at Sturminster Marshall Gravel Pits there were 2 Egyptian Geese, 2 drake Red-crested Pochard, an immature drake Scaup and a Green Sandpiper.
Posted by Malcolm Dowty at 23:07

Long-tailed Duck - 3 on the Fleet near Abbotsbury Swannery
Velvet Scoter - 1 past Portland Bill
Great Northern Diver - 2 past Durlston
Hen Harrier - 1 near Swanworth Quarry, Worth Matravers
Purple Sandpiper - 4 at Hengistbury Head
Jack Snipe - 1 at Swineham
Grey Phalarope - 1 flew over The Run at Christchurch Harbour
Waxwing - 14 in the Tescos car park near Bournemouth Hospital, 3 at Tolpuddle, 1 at central Portland
Posted by Kevin Lane at 08:52 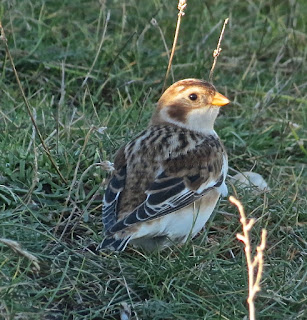 Dorset Bird Club and the Rare Breeding Birds Panel advocate special caution when reporting rare breeding birds as they are vulnerable to persecution and disturbance.
Please consider the birds welfare and do not share details of any rare breeding species on Twitter, Facebook and WhatsApp groups, personal websites, blogs, or local birdwatching message boards.
We urge all those birdwatchers lucky enough to find rare birds to consider whether they may be breeding before sharing the news.
Sightings should always be submitted, in confidence, to the county recorder to contribute to long-term monitoring.